Yesterday I learned the value in committing often. I accidentally deleted everything I had done Monday in trying to get rid of some code I wrote while following the wrong path to creating a customer for Stripe. Soooooo, that was frustrating. I got most of it rewritten, but there was a tricky part I had needed help on, and now I can’t remember what we did.

Today I’m going to continue rewriting the code that was lost and then go back to attempting to create a customer in Stripe. Man, I’m so close to finishing this project. I can almost taste it!

I had planned on doing some more Ruby tutorial/Code School/Treehouse stuff today, but Brandon is unexpectedly in the office, so that may change. Today makes 12 weeks since I started my apprenticeship, but I’m still at least a month out from (hopefully) being hired. Brandon told me that they picked 12 weeks fairly arbitrarily and that as long as I was making progress it was fine if I didn’t finish in that time, but it’s still frustrating to be behind. Still, I can tell that I know way more than I did 12 weeks ago, this bookstore project is coming along despite my stupid git tricks, and it’s all going to wind up awesome. 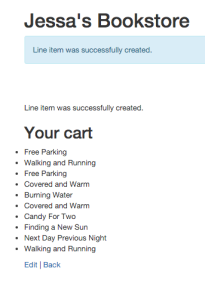 I got the shopping cart working!

Well, after a lot of bashing my head against it, I got the shopping cart to work! And it persists! And I can change the quantity of the books I’m adding! It doesn’t sum up my order, but by the time I got the cart working I was super done for the day. I don’t know why it says “Line item was successfully created” twice up there, I think I have too many notices going on, but when I was trying to get it working last night I would either have two or none. I think maybe the Bootstrap stuff we did is having some effect on it, since the top one is in a blue box. One of the things that I found really frustrating when I was working on this is that there doesn’t seem to exist a simple bulleted list of how to make a shopping cart in Rails. There are lots of tutorials, but they’re generally part of a pre-existing project where the author has had you make models and controllers with an eye to the eventual goal of adding features like a shopping cart. I’m pairing with Brandon today, and I think I might get him to go though it with me so I can feel less frustrated next time. Sadly for me, shopping carts are on the web to stay, so I should figure out a better way of doing them than the hodgepodge of tutorials and suggestions from other people that I currently have.

Today I actually made a list of things I want to accomplish.

One of these is easy, and I shall do that first. 🙂

Hopefully I will end the day with a list of how to make a shopping cart (I wonder if that would be worth a blog post? Maybe I should suggest it to Ellen.), as well as a completely working shopping cart. Provided that happens, I think I can work on Stripe tomorrow!

Yesterday I worked through a bunch of Cucumber tests. They’re kind of weird, sometimes the answer is dead simple, but other times it’s super complicated. It still takes me some time to figure out which is called for in each individual test, I spent like half an hour on the click one yesterday.

Simple, not so simple

I’m also still not sure how complete the Cucumber tests are supposed to be. Is this like when we did Battleship at TIY, once all the tests are passing I’ll have a finished app? Brandon mentioned that I’ll need to have some Rspec tests in there too (that I’ll write myself), but I’m not sure what they’ll cover? I haven’t actually written any real code for this app yet, it’s all been installing gems and making tests pass. I guess it’ll all get clearer as I go, though.

Today I’m going to read more of the Cucumber book and then work on the bookstore app. I keep meaning to ask Kevin to explain scoring in bowling to me so I can work on the kata, but I always forget by the time I get home. I feel like I’m not accomplishing anything during my days, and that’s stressing me out. I think sometimes I have a hard time actually beginning projects — like, I have this feeling that if I just read this one more thing, or do that one more tutorial all of a sudden everything will fall into place and I’ll be the brilliant coder that everyone seems to think I can be. Unfortunately I don’t think that’s how it works, though. I don’t know. It’s really hard for me to get started, I never really feel like I have any idea what’s going on. Sometimes I ask too many questions about things that are actually easy and other times I feel like something’s got to be simple and waste hours trying to figure out a solution before asking someone. Yesterday I spent way too long trying to figure out how David knew to use ActionMailer in something, and when I finally asked it turned out that he had just installed a gem. Although honestly, I wouldn’t have even known that I needed ActionMailer if I hadn’t peeked at his code in the first place. Do you just learn this stuff as you go? Is there some intuition that I’m missing? I really like this job, and Brandon told me that I’m progressing at a good pace, but I feel like I’m behind and my stupid brain immediately goes to “you’re going to fail and they’ll never hire you and you’ll never get a job and you’re a miserable failure why do you even try anything new.” Which isn’t exactly useful in any sense. I’ve gotten better at shutting that off, but it’s hard when I’m sitting in front of my computer feeling stupid.

I have no idea what I expect to learn today.